“whatever good things we build end up building us.” -jim rohn

in the tech world today, value is being created so fast, it can feel like it’s just overnight. it’s exciting. from palm to twitter to sand hill road, it’s an electric time to be a builder and investor, no doubt. while the pace of value creation ticks up, i do wonder what we may lose as a result, the risk that used to be associated with joining a startup — the stigma, even. i wonder if startup jobs are the new corporate jobs, as former colleague @al3x provocatively articulated. but mostly, i wonder if the long years of pain and suffering even the successful companies of old experienced may be lost on a generation.
i’m uncharacteristically nostalgic today because i have some uncharacteristic news to share: a company that i founded in 2002 — 11.5 years ago — is finally going to have an exit (and an exit that provides a strong return for investors and a great outcome for colleagues and team members). back in 2002, i had a simple premise that the standardization of interfaces to data would enable a new layer of processing to be created — data virtualization. thankfully, i convinced other people the idea had merit: the engineers, investors, executives, and customers that would come to form the nucleus around the company. today, i’m excited to announce that composite is partnering with cisco to take data virtualization to a grander scale. building composite was the roller-coaster everyone talks about, but it was also a blast, mostly because of the people involved. since 2002, composite “alums” have gone on to big things, such as founding or being on the starting team of Adchemy, Marin Software, Ludic Labs (Groupon), Reverb, and Hortonworks, to name a few. saying “thank you” on this blog feels a bit inadequate given the blood and sweat of the engineers who worked out of my house to build the initial version, to the many advisors and friends who helped me as a first-time founder/CEO, to the investors who believed that in 2002 startups could still deliver venture-scale returns, to jim green who left his public post to become ceo when i wanted to return to doing technical work, to stephen ahuero/will lam/wilson yu who have worked at composite since it started in my house and are still employees today, to the countless employees who helped build a real enterprise business that generates real, sustainable value, and to my friends….i will be forever grateful.
i normally wouldn’t boast about an exit, as it’s not my style, but the main purpose in writing this is for the founders and future founders out there — to point out that i started composite software almost twelve years ago — 12 years! — and finally today got to the elusive exit all founders seek. it didn’t happen in one year, or within a venture cycle, or even within a decade :-)….it took a lot of sweat, patience, low moments, fear, drive. there’s a great post by ben sesser on pando, “it’s damn hard to build an enterprise business.” go read it. it strikes a deep chord with me. and it takes the commitment of scores of believers — not just the founder — to carry the company through. while it all may sound cliche, i’ve lived it, and it’s true. we all have the scars to prove it, which is why today tastes so good. 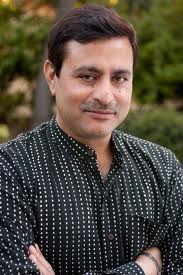 four years ago today,  rajeev motwani passed away, but his spirit lives on.
a few weeks ago, i was emailing with a friend in the valley, about mentorship and our times through the valley. we may be young, in one sense, but we’ve been around the valley and technology now for some time. as we discussed mentorship, my friend asked a curious question: “who filled the hole once filled by rajeev?”
i didn’t have an answer. there isn’t an answer. there is only one rajeev.
the “rajeev” he meant was rajeev motwani, famed professor, mentor, investor, and advisor to some of the valley’s biggest and brightest computer science minds. like many others, i was lucky to not only call rajeev a friend and mentor, but had the added luxury of having him as an investor and advisor in my first company, composite software. it was funny how we met — when i was raising money for composite, three different venture firms asked rajeev to conduct tech due diligence on my work.
i was intimidated of rajeev’s intellect at first, but as we spent time together, rajeev invested in me and, in the process, i got to know him and his family very well. he was a very trusted advisor. he helped me think through financings. he encouraged me not to bring in an external ceo. he also encouraged me later on to move on from the company, as i’d lost control of composite and needed to move on. those were tough decisions, but having rajeev there made them much easier. i went up to microsoft, and rajeev connected me with great folks there. when i’d come back to visit, i’d always see him.
a good number of people reading this will know rajeev and probably nod their head as they’re reading this. they’ve felt his mentorship and, in some way, still do. and, there’s a younger set of you who will have to google him and read his wikipedia entry. but, those entries don’t do him justice. he was taken from us too young, and i still think about him when i’m driving home on el camino. and, i wonder who does, in fact, fill rajeev’s shoes these days? who is out there mentoring for the sake of giving back, for the sake of pushing talented people to the limit, to achieve their potential and be there when things aren’t rosy as it all seems. can anyone fill his shoes, let alone just one toe?
how did rajeev have all this time to help me and countless others? i’m trying to fill in a small part of the hole left by rajeev, just a little. it’s impossible to do so, to the level he did. i’m hoping more of my peers do as well. and i’m hoping that, somewhere, out there in the world, the next rajeev — if that’s even possible — graces us in the valley with his or her presence. these days, we need it more than ever.