in the last few years, people have noticed how data science can drive critical insights in the business world. now, people are turning their attention to the social importance of data science. and they are seeing that the programming skills that are in such demand in silicon valley can also help solve some of our biggest public problems.

i’ve seen this in my own work, including helping to fix healthcare.gov last year and serving as an adviser to the u.s. digital service. today, with the rise of public data sets and new ways of combining the data, there are great openings for skilled engineers who want to make a difference.

the team that won the hackathon, for example, built software to detect hidden child prostitution rings. the team was working on behalf of thorn, a non-profit with the mission of becoming “digital defenders of children.” one of the runner-up teams created an algorithm to more efficiently position police cars to respond to 911 calls. others went to work on problems that ranged from water conservation to workplace safety.

what was amazing about the hackathon was how undeterred all of the participants were. they didn’t mind if the problem they were taking on seemed intractable or was in a field that is highly regulated. they simply went to work, bringing to bear all of the persistence and creativity they could muster. and as we know from hackathons, a great team – even in the course of a single weekend – can accomplish a lot.

we’re all busy – but even the busiest among us has spare cycles. one of the members of that winning team at the hackathon? none other than peter reinhardt, who in his day job is ceo of segment.io, a customer analytics company that has raised more than $15m in venture capital funding. so you don’t need to give up your day job to change the world. just get started and you’ll find a way. this event has inspired me to focus my next sw project in the area of ‘hacking for social impact’ and hope to post my project soon! 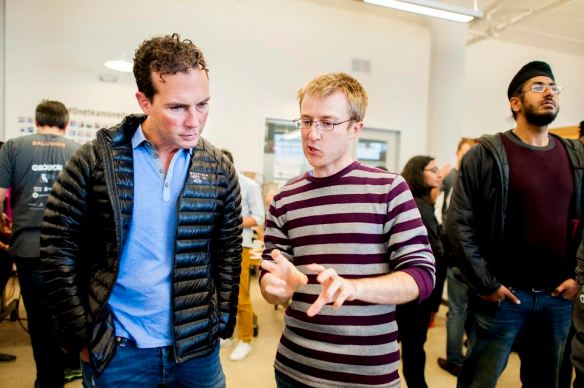